West Ham United youngster Benicio Baker-Boaitey should be leaving the club in this transfer window, according to claims from Portugal.

Newspaper O Jogo reports that the winger is on his way to Porto, where he’ll reinforce the Dragons’ U19 squad.

The outlet claims that the process for his signing is ‘very well forwarded’ and should be completed in the coming days.

It’s pointed out that the talent shown by Baker-Boaitey in West Ham’s youth ranks has been encouraging attention from several sides, and that’s why he’s been linked to the likes of Barcelona and RB Leipzig. 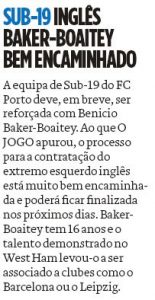 The winger turned 16 years of age this year, and even made three appearances in the U18 Premier League. He also made his debut for England’s U16 squad this season.

The reason he’s leaving England isn’t made clear by O Jogo, although he was probably promised more chances with Porto’s first team as soon as he gets to the right age.

Following an example of Marcus Edwards, who left Tottenham to do well at Vitória Guimarães this season, this shouldn’t be a bad idea.