Leicester City surprised the footballing world when they won title during the 2015/16 season, and the Foxes achieved it by losing only three league games throughout the campaign.

Claudio Ranieri was appointed as new manager at  theKing Power Stadium in the summer of 2015 and the Italian was instrumental, along with the likes of Jamie Vardy, Riyad Mahrez and N’Golo Kante, in their title winning campaign.

One of the attackers in the English side during that season was Leonardo Ulloa, who left Leicester for Mexican side Pachuca last summer and returned to Europe at the end of last month after Rayo Vallecano completed his signing.

Spanish newspaper AS had an opportunity to talk to the 33-year-old and during the course of the interview, they asked him about the success he achieved with Leicester.

“That was a crazy thing, [we] exceeded expectations. The big [clubs] were not good and, after the month of December, people began to believe and us too,” he said.

“We only lost three games in the whole season. That made a difference, we were solid [at the] back.”

Ulloa also gave an insight on the celebrations he had with his former teammates once Leicester were confirmed champions, which ended up getting out of control.

“We played at Old Trafford and if we had won, we were the champions. We drew against United, so we had to wait for Tottenham, who played the next day,” the Argentine explained.

“We stayed at Vardy’s house to watch the game. I sat with [Andy] King and [Robert] Huth and they told me: ‘Leo, Tottenham hasn’t won at Chelsea’s house for more than twelve years.’

“I looked at them and asked: ‘And just today will they win?’

“Tottenham were leading 2-0 at half-time, but we went crazy when [Eden] Hazard equalised. Until four in the morning we could not leave the house.” 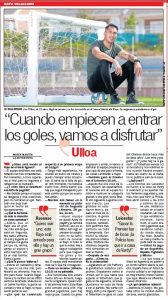 “The Leicester fans came to Vardy’s house to celebrate and they wanted to get in. We had security and, in addition, the police had to come… we left one at a time. We had been in the yard chatting, not believing what we were living.

“Except Huth, the rest were players that had been fighting from below. It was nice. For a month and a half, I could not leave home.”