Tuesday night’s Manchester United game against Juventus is pure gold for the Italian newspapers, as it means both Cristiano Ronaldo and Paul Pogba face their former sides, as the two clubs fight for top spot in Group H in the Champions League.

The Portuguese star’s return has been somewhat overshadowed by off the field problems, but the Frenchman’s hasn’t, which is a first, really.

Gazzetta dello Sport, however, take a long good look at how things have gone for Paul Pogba since his return to Old Trafford, dedicating two pages to it.

Among the many topics, they discuss his clash of personalities with Mourinho, and how he isn’t really the type of player to respond to his manager’s style of motivation.

As they put it: “Often you hear players say they would follow Mourinho ‘to hell and back’. That wouldn’t work with Pogba because he wouldn’t follow anyone to hell, he wouldn’t see the point of it. It’s too hot down there.”

Paul Pogba is a sensible man. 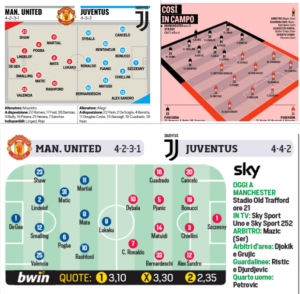 However, that doesn’t stop Mourinho from picking one of his best players regularly, and it’s almost a certainty the midfielder will be on the pitch on Tuesday evening.

Why change something that worked? That’s the mentality the Italian press believe the Manchester United manager will have when picking his starting eleven.

Drawing 2-2 against Chelsea at the weekend, the Red Devils played considerably better in the second half than they did in the first, and all three main newspapers (Gazzetta dello Sport, Corriere dello Sport and Tuttosport) believe the same front six will play.

That means they expect Mourinho to field Anthony Martial, Juan Mata and Marcus Rashford behind Romelu Lukaku, while Paul Pogba and Nemanja Matic provide the service from midfield.

It’s only when it comes to the back four that Gazzetta differ from their counterparts, believing Ashley Young will start at right-back instead of Antonio Valencia, whom both Corriere and Tuttosport preferred.

Yet, when it comes to their own side, Juventus, the Italians aren’t 100% sure what Allegri has planned.

While the defence picks itself (Szczesny in goal, with Joao Cancelo, Giorgio Chiellini, Leonardo Bonucci and Alex Sandro in front of him), and so do Cristiano Ronaldo and Paulo Dybala, the remaining four are all different.

Miralem Pjanic and Blaise Matuidi are both constants, but Gazzetta have Bentancur partnering the Bosnian, while the French midfielder plays wide left, with Juan Cuadrado on the right of the 4-4-2.

Tuttosport see it as a 4-3-3, with a midfield trio of Bentancur, Pjanic and Matuidi behind Bernardeschi, Ronaldo and Dybala.

Finally, Corriere dello Sport go for a very attacking 4-4-2, with Cuadrado and Bernardeschi out wide, and Bentancur remaining on the bench.