When Giovani Lo Celso to Tottenham rumours first really kicked off, it was clear they’d been pushed out to the Seville media by someone at Betis.

The idea was to hype the price as much as possible and set the scene for a sale.

Tottenham didn’t play ball and went in with an offer around half the €80m which Betis wanted. Then the story went quieter, with it being explained every now and again that €75m should do the trick, there even being claims Lo Celso’s dad had agreed such an amount with the club.

Today has seen several new Tottenham claims, all coming from the Seville media.

Earlier we covered Estadio Deportivo reporting Spurs representatives held a meeting this week with Betis in a well-known restaurant on Calle Betis, on the banks of the Guadalquivir River.

That’s the kind of detail which doesn’t get plucked from thin air, someone is feeding these claims.

Diario de Sevilla have something too. They explain contacts are continuing, although there’s no agreement on price yet.

Mauricio Pochettino is said to want the signing ‘at all costs’, yet Tottenham won’t hit that €75m figure Betis so desperately want.

This isn’t a situation where Daniel Levy is being unreasonable. Spurs’ first offer was, of course, too low, but there’s no need to bend to what Betis are demanding. 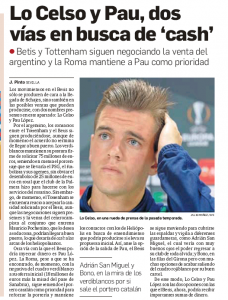 Just like with Lyon originally wanting €80m+ for Tanguy Ndombele, there’s not an awful lot the selling club can do if they don’t have the desired interest.

Manchester United have been linked but nothing especially serious, and the same goes for Atletico Madrid. Until that changes, Tottenham have some comfort.

Diario de Sevilla report Betis are ‘in search of cash’ which will come from either Lo Celso or Pau Lopez, the latter now valued at €25m+.

Patience with this one seems worth it, and perhaps another offer, a smidge over €60m, could do the trick. Tanguy Ndombele II.