Mauricio Pochettino’s telephone calls to footballers were referenced repeatedly over the summer. Confirmed by players after joining, the Tottenham boss seems to have a good line in transfer chatter, and an ability to convince players their career would be best served by joining Spurs.

Now it’s a fact that these calls happen, they’re going to be used in transfer rumours to try and firm things up. Of course, just because we all know Pochettino makes these calls, it doesn’t mean every time one is claimed it’s true… and that’s worth Tottenham fans keeping in mind ahead of it being claimed Poch has spoken to a phonebook full of players.

Maybe inspired by Fernando Llorente this week talking to the Spanish press about his Poch call, Marca claim the Tottenham manager tried the same with Isco.

It was the summer of summer 2016, say Marca, setting the scene, and Isco’s stock was low, a rumour appeared of Tottenham being interested in the player: ‘In the English club they dreamed and awaited events until Pochettino, who already knew that in the 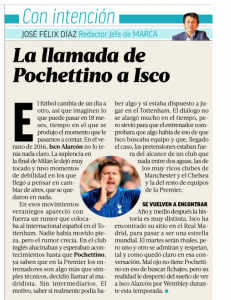 Premier League coaches are more than simple technicians, decided to call the Madridista. Without intermediaries.’

Pochettino’s leap into the unknown wasn’t very successful, say Marca, which is evident by the fact Isco stayed where he was.

And even if he was going to leave Real Madrid, it wouldn’t have been for Tottenham: ‘the pretensions were beyond the reach of a club that swims between two waters. Of the very rich clubs of Manchester and Chelsea and the rest of the Premier League teams.’