The Italian media are very much Tottenham focused right now as Inter Milan travel to London to play in the Champions League.

Much of the focus has been on the supposed state of the Wembley pitch, with the issues perhaps being talked up into something they’re just not.

Gazzetta dello Sport have spoken to Mauricio Pochettino, and surprisingly they didn’t ask him about the big talking point. Maybe they didn’t want to offend, or perhaps had already been told the topic would be off limits.

They did ask a lot about his coaching career, and arguably the most interesting question was the final one.

With a lot of rumours around the future of Pochettino, and links to clubs such as Real Madrid and Manchester United, Gazzetta went about their future probing a different way, asking the Spurs manager where he sees himself in five years.

The answer was positive for the club’s fans… as long as Daniel Levy doesn’t sack Pochettino first.

“My contract expires in 4 and a half years. If Levy does not fire me first… (laughter). 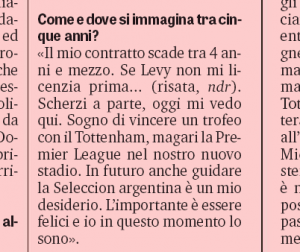 “Seriously, today I see myself here. I dream of winning a trophy with Tottenham, maybe the Premier League in our new stadium. In the future to also guide the Argentine team is my desire. The important thing is to be happy and I am right now.”

Should the manager see out his contract then he may feel it the right time to give Argentina a whirl, the opportunity comes up often enough.