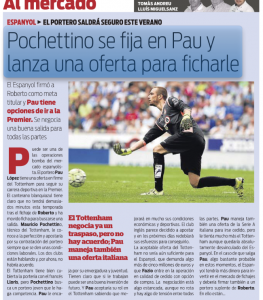 According to Monday’s edition of Catalan newspaper Mundo Deportivo, Mauricio Pochettino is behind a Tottenham move for Espanyol’s Pau Lopez. The Argentine manager is said to have identified the 21 year old as a young goalkeeper who could provide competition to Frenchman Hugo Lloris.

Tottenham already have an excellent back-up option in 32 year old Michel Vorm, and there’s absolutely no mention of him from Mundo Deportivo.

Pochettino is said to know the player, referred to generally as Pau, ‘perfectly’ and feels he could be a young competitor for Lloris. There’s no suggestion Pau would be such strong competition that Lloris would see his place under danger, the youngster isn’t close to that level yet.

The Espanyol talent is also the subject of interest from an unnamed Serie A side, according to Mundo Deportivo. Tottenham are said to have made a ‘firm’ offer for the player, but it’s not clear if that approach has been to the player or his club.

Spurs are very keen, according to the claims, and will redouble their efforts to sign the player.