Amid all the stories of a potential Mauricio Pochettino return to Tottenham, the names of other managers are still being thrown into the ring.

We’ve covered the interest in the past, with it said the Italian manager had a ‘pharaonic’ offer from Tottenham, with a salary of over €15m/year on the table, and now Gazzetta dello Sport weigh in.

According to the newspaper, Conte is ‘very tempted’ a move to the capital, with it made clear ‘the Premier League and London remained in his heart’. 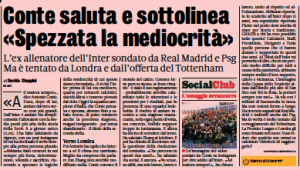 This comes after a line revealing both Real Madrid and (indirectly) Paris Saint-Germain got in touch with him, placing Spurs at the top of his wishlist right now.

Certainly good news for Daniel Levy, and while it appears that Pochettino is the ideal man for the job in the Tottenham chairman’s eyes, Conte as a back up plan really isn’t a bad scenario.