It doesn’t matter whose media you look at, Mauricio Pochettino is the favourite to replace Ole Gunnar Solskjaer at Manchester United should the Norwegian get the sack.

The Argentine is out of a job since his dismissal from Tottenham, but after a nice break, he’s made it very clear he would like to return to football.

While he might have a preference for the Premier League, there’s every chance he could take a job elsewhere too, which is why Manchester United are likely to have more than one name on their list.

Another, it seems, is Max Allegri, who has been out of a job for more than a year since leaving Juventus.

Gazzetta dello Sport on Friday look at the situation of both Solskjaer and Thomas Tuchel at Paris Saint-Germain.

They write both Allegri, ‘advocated by Leonardo’ and Pochettino are on the Ligue 1 champions’ list, ‘and they are the same names highlighted on the Glazers’ list’.

We’ve already pointed out the former Tottenham man is keen to take over a new squad when the opportunity presents itself, and that appears to be the same for his Italian counterpart. 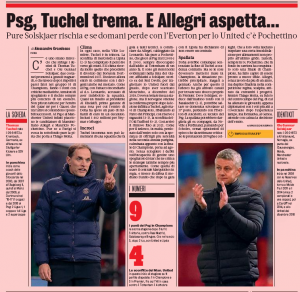 Gazzetta state the ex-Juventus manager is ‘attracted by both projects’, meaning Paris Saint-Germain and Manchester United.

Both will undoubtedly know one job is a bit easier than the other in terms of getting results in their respective leagues, but the pressure at both will be incredible.

The French side are obsessed with winning the Champions League, while those in charge at Old Trafford want to ensure their club’s reputation remains as intact as possible following years of struggle (by their expectations) since the departure of Sir Alex Ferguson.

Either way, it seems that if United approach Allegri, he’d be up for it.