The ongoing saga surrounding Barcelona defender Yerry Mina is about to come to an end, if the reports in the Catalan media are to be believed.

Today’s edition of Sport claims the Colombian international will play in the Premier League next season as he continues to attract interest from Manchester United and Everton.

Ernesto Valverde’s side are convinced the 23-year-old’s sale to United will be ‘very economically advantageous’. The Blaugrana are demanding €40m, while it’s claimed United have launched their first proposal of €35m for Colombia’s star player at the 2018 World Cup.

Jose Mourinho’s side are also looking at other options and Barcelona’s reluctance in not reducing their price tag could see Manchester United walk away from the deal. However, the Camp Nou outfit are unmoved by the whole situation and are not ready to drop the asking price for Mina.

Everton are also interested and have submitted a bid of €32.5m for the player. 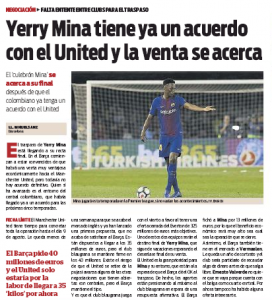 Sport claims the central defender, who is currently on a holiday waiting for the final outcome, will play for either United or the Toffees. Playing for the Red Devils is a ‘high priority’ for Mina.

The transfer window in England closes on August 9th and a solution should be found for Mina in less than a week’s time.