On July 23rd, we carried a report from Le10 Sport, who explained how Wolverhampton Wanderers decided to target AS Monaco’s Joao Moutinho after they failed in their attempts in signing Strasbourg’s Jean-Eudes Aholou.

Today’s edition of L’Equipe explains the newspaper have contacted the Ligue 1 outfit to get an update on the Portuguese international’s situation at the club.

They have been informed that all the three parties were discussing and the midfielder’s transfer to Molineux Stadium is ‘possible’ this summer.

After Fabinho’s move to Liverpool, Leonardo Jardim’s side are also willing to allow the 31-year-old to leave, as they look to freshen up their midfield. Aholou is set to join Monaco and Aleksandr Golovin is expected to follow him this summer. 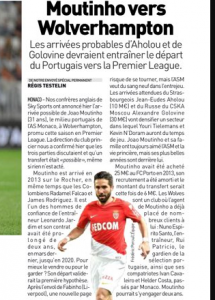 Moutinho has two years left on his contract and the French club will allow their player leave the club.

If he joins the newly promoted Premier League club, Wolves will pay €6m to Monaco and the former  Porto star will sign a two-year deal.