Yerry Mina is edging closer towards completing a move away from Barcelona, if reports are to be believed.

Sport claims the La Liga winners could ‘formalise’ the Colombian international’s exit from Camp Nou in a ‘matter of hours’ as the Blaugrana will raise more than €30m from his sale.

We have carried several reports talking about interest from Everton and Manchester United. The Catalan newspaper report says the Merseyside club made the first offer weeks ago and the defender was satisfied with it, but everything came to standstill after the Red Devils expressed their interest in the centre-half.

So far, there has been no definitive movement from the 20-time English champions in signing the former Plameiras man. Therefore, everything indicates the centre-back should be joining Marco Silva’s side and the deal with the Toffees could be sealed in a ‘matter of hours’.

Apart from Everton and United, Mina also had interest from Lyon, but the 23-year-old felt a move to Goodison Park will see him get more playing time and he’s decided to join the Toffees. 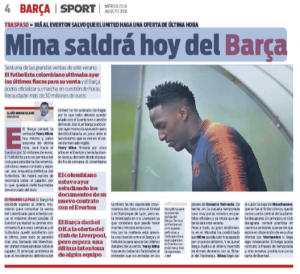 Everton will pay €32m to Barcelona for Mina and there will be no buyback option. He is set to sign a five-year deal with the Premier League outfit.