Earlier reports stated the Toffees paid €25m for the attacking midfielder and his former club Banfield were expected to receive part of the fee.

However, the Argentine club later confirmed they didn’t receive any fee because the 29-year-old joined Everton on a free transfer.

Since arriving at Goodison Park, the Colombia international has been in fine form, managing three goals and three assists in five matches in all competitions. His ‘stellar’ performances have helped Carlo Ancelotti’s side with a great start to the season.

Saturday’s edition of AS explains Rodríguez’s emergence in the Premier League has ‘upset’ Real Madrid.

It’s claimed officials within the Spanish club are ‘showing their disappointment’ towards Los Blancos’ management for the manner in which Zinedine Zidane handled the likes of the South American, Gareth Bale, Sergio Reguilón and Dani Ceballos. 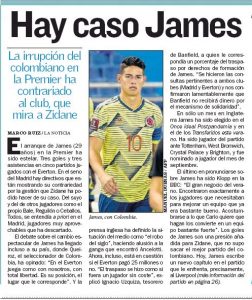 They were of the belief the aforementioned players were ‘very useful’ at Real Madrid, but were ‘discarded’ by their manager.

Should Everton continue to do well, and should Madrid struggle, then this issue is only likely to grow.