‘Bye Arthur, here’s Jorginho’ is splashed on the front page of Thursday’s Tuttosport.

Within the report, it’s explained Arthur’s decision to continue at Barcelona will have an impact on the swap deal involving the midfielder and Juventus’ Miralem Pjanić.

It’s claimed the Brazilian’s unwillingness to cooperate has frustrated the Old Lady, the Spanish champions and Pjanić.

Those in charge at the Turin club are beginning to get used to the idea that the operation with the Camp Nou side is ‘destined to fail’.

Therefore, Juve are now looking at Paris Saint-Germain’s Leandro Paredes, while Chelsea’s Jorginho ‘winks’ at them.

Joao Santos, the agent of the ex-Napoli man has recently reiterated the Blues midfielder is liked by Maurizio Sarri.

Tuttosport have taken it as a sign the 28-year-old could leave Stamford Bridge to reunite with his former manager. Jorginho’s representative, however, had also stressed he had no contact with the Serie A winners. 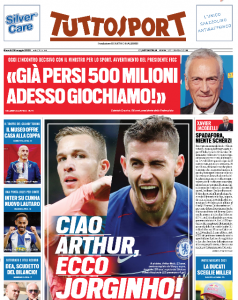 Although the Brazil-born Italy international has opened the door to joining Juventus, Chelsea would have a tough task in bringing Pjanić as part of the operation.

The newspaper states the Bosnian would consider a move to PSG and it ‘seems unlikely’ the 30-year-old would prefer to join Frank Lampard’s side.