Barcelona’s Frenkie de Jong is the main target for Erik ten Hag and various reports have stated the manager has already held numerous talks with the 25-year-old.

With the Red Devils pushing to sign the ex-Ajax man, AS now claim his ‘sale enters the decisive phase’.

The La Liga side have been credited with interest in Valencia’s Carlos Soler. Last week, Jorge Mendes was in Barcelona to hold talks with the Catalan club’s leaders. 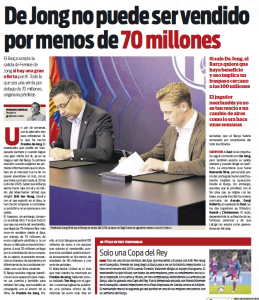 AS add Mendes put forward Soler’s name and it was done only because there is progress made in the Netherlands international’s sale to Manchester United.

Barca’s objective is to sell the Dutchman before the end of this month. This allows them to raise funds and lower their wage bill, which is essential for them to sign a new player like Soler, who is appreciated by Xavi Hernández.

Sport explain De Jong now is no longer opposed to making a move away from the Camp Nou, after initially refusing to leave the Spanish giants. However, a deal won’t be easy because Barcelona are demanding €100m for him.

Having paid €75m plus €11m variables to Ajax in 2019, selling the midfielder now for less than €70m will see Barca suffer a loss.

Therefore, they are demanding €100m, with at least €80m in fixed fee and the remaining €20m as potential bonus payments.

It’s unlikely they’ll get that, with a total deal worth around €80m seeming fair.