The front page of Sport reports Chelsea star Willian’s representative has travelled to Barcelona. In the ‘next few hours’, a meeting is scheduled at the offices of the Camp Nou to find out the player’s position.

Barcelona want to know first hand if there are ‘real options’ of securing Willian’s signature. They are also keen to know to what extent the 29-year-old is ready to force his transfer away from Chelsea.

Ernesto Valverde’s side are aware it will not be easy to negotiate with Chelsea for Willian, and they have already submitted their third proposal for the attacker, which is around €60m.

Sport claims Barcelona do not want to become ‘crazy’ for a player who will turn 30 in August, and their latest bid is considered to be a ‘high amount’ for a player of his age. The Spanish champions are hopeful the pressure from the player could convince Chelsea to accept their proposal. 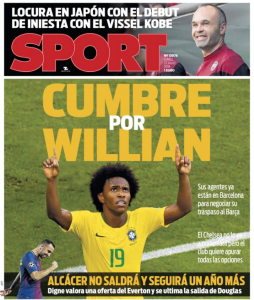 The Catalan club and Willian’s agent are developing a strategy to convince the Brazilian join Barcelona.

They want to motivate him with athletic reasons. If he joins Barcelona, he will be able to play in the Champions League, something that is not possible this season if he continues at Chelsea.