On March 27th, we covered a report from Mundo Deportivo, who explained that Manchester United are ‘very attentive’ to Philippe Coutinho’s situation at Barcelona.

It was further explained the Red Devils are convinced they can seduce the 26-year-old to lead their project next season.

There have been several claims in the British press linking the Brazil international with a move to Old Trafford and on the front page of Tuesday’s edition of Sport, it’s once again claimed the 20-time English champions are on alert over the midfielder’s situation at Camp Nou.

Coutinho arrived at the Catalan club from Liverpool in 2018 and another report from Sport now claims the South American’s past connection with the Merseyside club could be a ‘stumbling block’ for him to consider joining Ole Gunnar Solskjaer’s side.

This is because the player is not ready to ‘taint’ his image with the Liverpool fans by joining his former club’s arch rivals Manchester United or local rivals Everton, if he has to leave the La Liga winners in the summer.

The Catalan media are claiming the Premier League side are attentive to Coutinho’s situation at Barca. 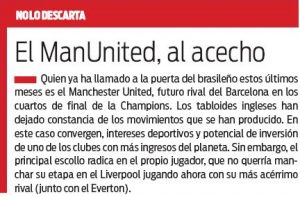 However, AS earlier reported the Old Trafford outfit have not opened the door for him to join the club after an agent offered the South American to United.