Denis Suarez has been heavily linked with a move to Arsenal, while his Barcelona teammate Malcom has been a reported target for Tottenham Hotspur in January.

Mundo Deportivo reported at the weekend that Barcelona could block Denis Suarez’s exit, if they allow the Brazilian to leave the Camp Nou, which could dent the Gunners’ chances of signing the 25-year-old.

There will be an ‘imminent outcome’ on the Spaniard’s future after the player gave his ‘approval’ to joining the Premier League side a few days ago and only agreement between the two clubs are missing.

It’s the transfer is at a ‘very advanced’ stage and ‘everything indicates’ the deal is likely to be formalised this week and the former Villarreal man will join Arsenal on loan until the end of the season.

The Catalan newspaper claims only the conditions of a loan deal need to be worked out as the La Liga winners plan to introduce a purchase option of between €15m and €20m at the end of the loan deal.

They also want to receive some payment for the loan, which Arsenal have been reluctant to provide. 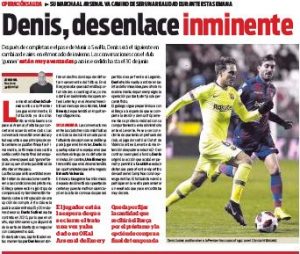 Suarez’s priority is to find a club where he can play regularly and has made it clear that he will only leave Barcelona for Arsenal after Unai Emery assured him of an important role at the club.

It’s now just a case of sorting out the remaining details, but Sport believe this one is closing in.