Chelsea settled for a 2-2 draw against Leicester City at the weekend and Frank Lampard started Willy Caballero ahead of Kepa Arrizabalaga on Saturday.

The Blues manager admitted it was a tactical decision to drop the Spain international for the clash at the King Power Stadium.

AS now claims it’s the first time the goalkeeper has been dropped due to technical decision since joining the Europa League winners from Athletic Bilbao in 2018.

For keepers who have played more than 10 Premier League matches this season, the report mentions ‘Kepa is the one that offers the worst percentage of stops: 55.56%.’

Manchester United’s David de Gea and AS Roma’s Pau López are the other two keepers for Spain and the duo, along with Kepa, have not been performing at their highest levels this campaign. 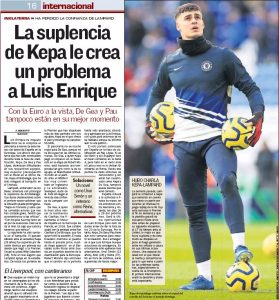 Spain face the Netherlands and Germany in March’s international break and the likes of Kepa, De Gea and López have time until then to reverse their situation.

If not, they could face the risk of being dropped from the national team squad for the summer’s European championship.