Monday’s edition of the same newspaper explains Barcelona need to raise €70m before the end of this month.

The operation that seems likeliest at the moment is the sale of the centre-back, who is currently on loan at Schalke.

According to the report, the La Liga winners could have reached an agreement with the Toffees weeks ago. However, they were waiting for better offers from other clubs.

Unfortunately for the Catalan club, no club have come forward to table an offer better than Carlo Ancelotti’s side for the 20-year-old. Therefore, the Spanish champions are about to give the ‘OK’ for the former Toulouse man’s sale. 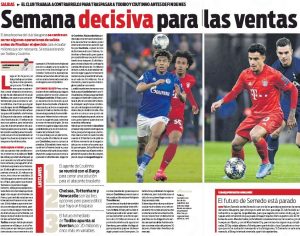 Sport state, ‘the player will double his salary once his Bundesliga contest with Schalke ends’. This would likely be at Goodison Park.

With Barca not willing to retain the player, Todibo’s ‘immediate future’ now points towards Everton.

It’s interesting to note that Monday’s edition of Mundo Deportivo, another Catalan newspaper, talks about the player’s situation, and there’s not a single mention of Everton.