Arsenal had wanted €23m for Hector Bellerin this summer but instead ended up allowing him to join Real Betis on loan for free.

That’s according to ABC Sevilla, who cover how the Spaniard ended up at Betis at the end of the transfer window despite having been deemed an ‘unattainable footballer’ at one point.

They detail the defender’s ‘heart and his efforts’ to join the La Liga club this summer and realise a childhood dream of playing for them.

According to their information, Betis met with Bellerin’s agents in May, and they worked up a scenario that was eventually realised on the final day of the market.

At that meeting in May, it was made clear that Bellerin would be a hard deal to get over the line as he was receiving an ‘extraordinary salary’ of around €6.6m a year at Arsenal.

His agents and Betis worked up a strategy to make him fit into the squad, with Betis needing the full-back and him determined to play for them.

Work was done in the background, but publicly it was made clear that the Arsenal man was out of reach economically.

Bellerin stayed quiet and continued to work at Arsenal, who also received interest from Atlético Madrid and Inter Milan. 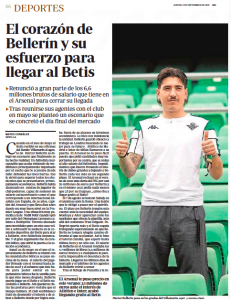 The Gunners, though, ‘did not make it easy’ for a move to happen, demanding large sums for a loan deal on top of his wages being covered.

They put a brake on any moves, while nobody was willing to match their €23m asking price for a permanent transfer either.

Meanwhile, at Betis they lost Youssouf Sabaly to injury so stepped up their interest in Bellerin, working hard to make space in the squad and salary cap.

Even then, though, Bellerin had to give up a ‘large part’ of his wages to make the move happen, with it having been ‘unthinkable’ earlier in the summer.