On September 28th, we relayed news from Spain that Barcelona defender Samuel Umtiti has suffered a serious injury and it could keep him out of action for several months.

The France international’s latest setback means his national team manager, Didier Deschamps, will not be able to include him in Les Bleus’ squad to face Iceland and Germany during this month’s international break.

Wednesday’s edition of French newspaper Le Parisien takes a look at the alternatives available for the World Cup winning coach for the upcoming international fixtures. This is when the option of including Kurt Zouma, who is currently on loan at Everton from Chelsea, is mentioned in the report.

The centre-back has started in five matches for the Merseyside club and despite winning only two of those matches and keeping only one clean sheet, he’s impressed with his individual displays. 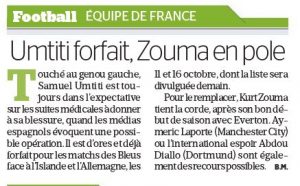 After the 23-year-old’s good start to the season with Marco Silva’s side, Zouma is one of the candidates to take Umtiti’s place, while Manchester City’s Aymeric Laporte and Abdou Diallo of Borussia Dortmund are also in the race to make it to the France squad.