Home Europe Player’s future thrown into uncertainty after Everton transfer, not according to plan
SHARE

Deulofeu, who spent the second half of last season on loan at AC Milan, had a clause in his Everton allowing a €12m return to the Camp Nou.

Throughout the summer there had been disagreement in the Spanish media over what would happen, with Everton having a clause themselves which meant Barcelona couldn’t sell on for a quick profit.

There’s also been uncertainty since the transfer, despite Neymar leaving a space in the squad. Deulofeu was used a lot as the season started but that has tailed off, and a new 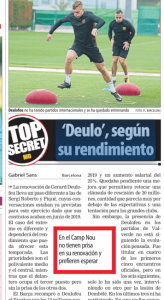 contract which was supposed to increase his wage and buyout clause, which currently stands at €20m, hasn’t arrived yet.

A new contract was all part of the initial plan, but that been put on pause now.

Barcelona first want to see how things go, but in theory the long term injury to Ousmane Dembele should be another factor in Deulofeu’s favour.

Everton receive a cut of the transfer if Deulofeu leaves at the end of the current season, and also have a first right of refusal, which is unlikely to mean much if Ronald Koeman remains at Goodison Park.