Angel Gomes’ performance against Benfica at the weekend is still a hot topic in Portugal. Following a goal and an assist in a 3-0 win, the former Manchester United player is having a terrific start at Boavista.

The 20-year-old left the Red Devils at the end of his contract last summer, and after signing a five-year deal with Lille, he was loaned out to his family’s home country.

His father continues to speak to the Portuguese media about the move, and it’s now newspaper O Jogo who features an interview with him today.

Gil Gomes, who’s a former Benfica player, claimed that Angel is having a quick success in Liga NOS as it’s a different football from the one played in the Premier League.

“In England football is more physical, it is different. In Portugal you can use the technique, you have more time to think,” Gil Gomes told O Jogo. 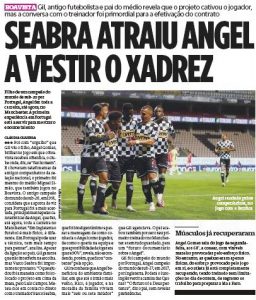 He also talked about the decision of making the move to Boavista, and after being his first coach at Manchester United, he said he has the footage to make a ‘documentary’ on his son in the future.

“What helped was the way the project was placed on the table, by Luís Campos. He put us in direct contact with the coach Vasco Seabra, who was very intelligent to convey the message of how he knew Angel as a player, how he wanted him in the team and that the possibility of playing was almost 90%.”

Angel Gomes joined Manchester United as a child, and despite being promoted through several levels, he was never officially part of the first team.

He made 10 appearances for the club between 2017 and 2020, and after feeling he was out of Ole Gunnar Solskjaer’s plans, he chose to leave at the end of his contract last summer.