While the Premier League is the ultimate goal for many a player, you have to be careful about the time you make a move to England.

Sometimes players decide on the switch before they’re ready, ultimately harming their career development more than aiding it.

Timing is everything and often deciding against a move is a wiser decision at a certain point in time. That’s how FC Lorient forward Alexis Claude-Maurice looked at it this summer.

Le Télégramme have an interview with the player’s father today, and he explains why his son turned down a move to the Premier League, with the Canaries particularly keen on his signature.

They offered €16.5m for his services, a sum Lorient were more than happy to take for the 21-year-old. 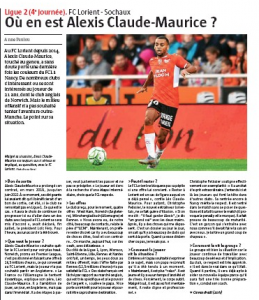 He rejected the offer, though, with his father explaining that while his son wants to play in England, now is not the right time for it to happen.

“France or Germany are trying more,” he told the newspaper.

“He has the ambition to play one day in England, but not in the immediate future. He has steps to take, wants to take them and not rush anything.

“The player is, therefore, looking for an intermediate step, a choice that Lorient respect.”

“We had a lot of contacts from our side. Now, we prefer to remain discreet because there have been many things said, everything and its opposite. Today, we walk on eggshells.”