Reinier made first team debut for Flamengo in July 2019 and finished the campaign with six goals and two assists in the league. Even before that, there were reports of interest from top European clubs.

On November 15th, we covered claims from Mundo Deportivo that Manchester City and Arsenal ‘contacted’ the 17-year-old’s father to discuss about the transfer.

Later that month, De Telegraaf explained Ajax are trying to get ahead of Pep Guardiola’s side and others in the transfer race.

Wednesday’s edition of AS claims Reinier’s father made a trip to Manchester to visit the Etihad club’s facilities.

The Gunners also get a mention along with City, as the newspaper states these two sides, along with Liverpool and PSG ‘tried to sign’ the youngster. Everton, Borussia Dortmund and Ajax were also interested. 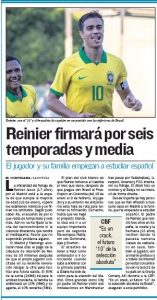 Unfortunately for City, Mikel Arteta’s side and other clubs, Real Madrid are expected to win the race to sign the midfielder.

The La Liga side are waiting for him to turn 18 (on January 19th) to make his transfer official and will then hand him a six-and-a-half-year contract.