The PSV striker is considering a move this summer, and a switch to Mexico is on the cards. It’s explained the player’s agent and father have travelled to Mexico City to further transfer talks and there had been confidence a deal was close.

But De Jong saying to the Dutch media that he’d always like to work with Marcel Brands again, and lightheartedly nodding towards an Everton move, is putting doubts in Mexican minds.

It almost certainly shouldn’t be.

Whilst 12 goals and 10 assists in the Eredivisie for PSV this season are impressive, the 27 year old had a sorry time at Newcastle United and that would always count against him 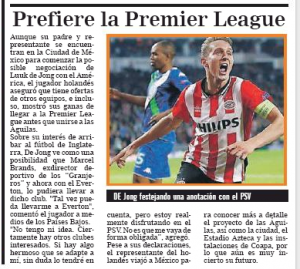 when it comes to interest from Premier League clubs.

And, on top of all of that, De Jong wasn’t really sending a come-and-get-me-plea, it was simply a lighthearted comment to explain how he’ll miss Brands.