The reports have been around for a while, and it’s thought that Trippier would like to return to English football, and is attracted by the prospect of playing for Manchester United.

Sport take things from Atletico Madrid’s perspective, and say it’s long been thought by the Spanish club that the Old Trafford side simply don’t have the liquidity to pay up for Trippier.

They believed this as the deal for Jadon Sancho was going through, and do so more after the announcement of a deal with Real Madrid for Raphael Varane. 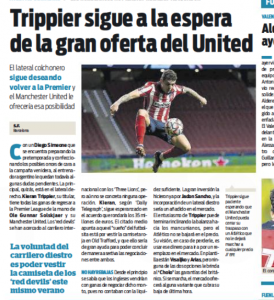 Atletico Madrid won’t be giving out any discounts, yet despite that it’s stated Trippier’s ‘enthusiasm’ to join Manchester United could ‘tip the balance’.

Whether that means the Premier League club paying up or Atletico coming down in price isn’t made clear.