Earlier today, we covered André Villas-Boas’ post match interview where the Portuguese manager commented on the offer made by Aston Villa for Morgan Sanson.

Speaking to Téléfoot, he described the bid as ‘very, very weak’, making it clear it wasn’t what had been discussed on the phone prior.

La Provence have more details on the matter in their newspaper, and while it was previously mentioned an €18m bid from Aston Villa, that’s not what Marseille received.

According to them, the offer ‘wasn’t enough to make the hierarchy salivate’ at €13m + €3m, and with Montpellier set to get a percentage of a future fee, the Ligue 1 club want more for a player they originally paid €9m + €3m in bonuses four years ago. 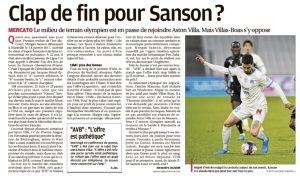 Still, the belief is Sanson is ‘on the verge of realising his dream of discovering England’, but for that, Aston Villa will have to up their bid and make sure they please André Villas-Boas along the way, as he appears to be in a foul mood these days following his team’s two defeats against Nîmes Olympique and RC Lens.