On August 6th, RAC1 reported that Tottenham Hotspur have been negotiating with Barcelona for the potential signing of Philippe Coutinho.

It was also explained there were other unnamed Premier League clubs believed to be interested in the Barcelona player.

The same day, Sport reported that Manchester United ‘have made their interest’ known for the Brazil international.

Wednesday’s edition of Sport claims Coutinho has several offers from the Premier League and his Camp Nou exit is being negotiated.

The former Liverpool star’s agent, Kia Joorabchian, had earlier ruled distanced the player from an Old Trafford move this summer. 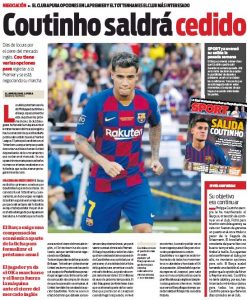 However, the report now explains that joining Ole Gunnar Solskjaer’s side cannot be discarded for the Copa America winner.

Though the possibility of Coutinho joining Manchester United is talked about, they are behind the north London club in the transfer race, and it doesn’t seem like they’re making big efforts to change that.