Last weekend, we brought you claims made by Mundo Deportivo that Tottenham Hotspur are interested in Barcelona’s Ivan Rakitić.

Friday’s edition of the same newspaper claims the midfielder is one of the players ‘discarded’ at Camp Nou by new manager Ronald Koeman.

He has a year left on his contract and the Catalan club are looking to find a solution in this window. The 32-year-old’s priority is to return to his former club, Sevilla, and if that option is ‘unfeasible‘, he ‘wouldn’t mind joining’ Spurs.

A move to either of these sides won’t be easy, and that’s because they’re not willing to pay the €10m fee requested by Barca.

The Andalusia club don’t have the budget to bear the cost of the operation, despite winning the Europa League. Sevilla could only pay, at most, a ‘symbolic’ fee, but there’s no mention of any figures in the report.

In addition to this, Sevilla and Tottenham don’t want to match Rakitić’s current salary. 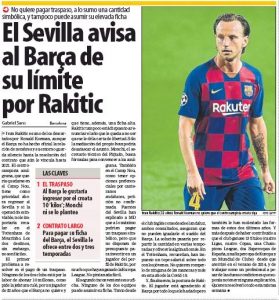 Mundo state Rakitić is unwilling to give up the last year of his contract, so compromise will be needed.