The Lionel Messi saga is already becoming tired, simply because of all the claims being made around the world. There’s been a rumour arms-race, with media personalities rushing to put out supposed updates every half hour.

One general consensus across the reporting is that Messi is keen to join Manchester City and reunite with Pep Guardiola. There’s been various takes on that situation, and AS has one in their Friday edition.

AS state the Argentine wants to sign for City ‘for free’ and ‘won’t hear any other offer’ than that of the Premier League club.

Thursday saw Barca president Josep Maria Bartomeu send a message via the media that he’d resign if it meant Messi continuing. That carried the condition of the player saying the president had been the problem.

AS believe this infuriated Messi and he wanted to reply immediately, but people close to 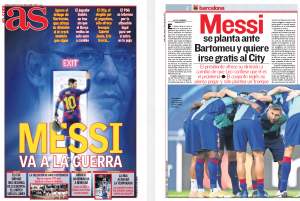 him stopped that. Now he ‘goes to war’, is ‘more determined to leave than ever’, and ‘no longer’ willing to listen to any other options than Manchester City.

He won’t back down, he won’t negotiate, and believes Barcelona are ‘morally obliged’ to let him go for free, given the record he has with the club.