Home Europe Player had been ‘winking’ at another club – Then he couldn’t turn...
SHARE

It may have only happened on deadline day, but Solomon Rondon reuniting with Rafa Benitez at Everton seemed inevitable this summer.

The two just love working together and once Moise Kean was shifted back to Juventus, bringing in the striker as a backup to Dominic Calvert-Lewin, particularly on a free transfer, was just good business sense.

It seems, though, that the Venezuelan striker could very easily have ended up elsewhere in this transfer window.

According to La Opinion de Malaga, Rondon had every chance of signing for former club Malaga as well.

The newspaper says he was in their ‘pool’ of targets this summer and the player even ‘made a few winks’ to the Malagueño club. 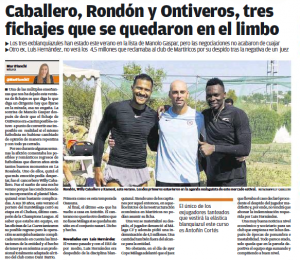 They would have been perfectly happy to bring him in, but Everton came along in the final hours of the market instead.

The Blues offer of two years with the option of a third was quickly accepted, with Malaga not even trying to compete as it ‘seemed impossible’.

Thus, Rondon headed to Everton and reunited with Benitez as the Toffees’ fourth signing of a summer that will certainly go down as one of their least exciting.