When Sevilla’s interest in Southampton’s Mano Gabbiadini was reported, it semed like a threat for the Italian sides who are looking to sign hin.

However, Tuttosport brings a story today saying that the player should really end up moving to his home country once he leaves the Saints.

The newspaper claims that the striker is pushing for a move to Italy, showing his desire to return to Sampdoria, where he played between 2013 and 2015.

It’s said that Fiorentina and Milan could well be a threat for Samp, but his former club are still confident that the signing can be made. 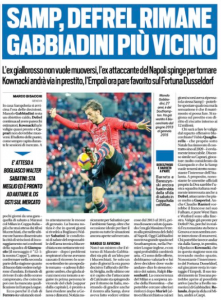 Sampdoria’s idea would be to land Gabbiadini on a loan deal, with a buying clause of €12m to be included in the contract.

Tuttosport points out that the striker can’t find much room at Southampton or in the Premier League, and that’s the main reason why he would leave.