Home Championship Player ‘will be transferred’ to Reading – Signing to be made official...
SHARE

Reading are close to signing Benfica’s Alfa Semedo, according to multiple reports coming out of Portugal today.

A Bola talk about players not included in Jorge Jesus’ plans at the club and who could leave the Portuguese side before the current transfer window closes.

The midfielder, who spent the last 18 months on loan at Espanyol and Nottingham Forest, is among them and it’s claimed he will return to the Championship on a temporary deal.

According to the report, the agreement is ‘practically finalised’, and the deal should be made official sometime ‘between today and tomorrow’.

A Bola states Reading have an option to make the 23-year-old’s stay permanent next summer for €6m.

Another Portuguese newspaper, Record, has a short report on Semedo and they also state the player ‘will be transferred to Reading’. 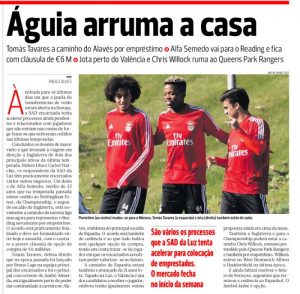 They have a different take on the possibility of Semedo extending his stay at the English club beyond this season.

Record explain the €6m purchase option becomes mandatory if Reading are promoted to the Premier League.