Regardless of who takes over from José Mourinho at Tottenham, it appears Erik Lamela will be leaving the club.

The Argentine’s contract is set to expire at the end of next season, but his lack of minutes and diminished impact over the past 12 months has made him an expendable this summer, with a return to Italy seemingly high up on his wishlist.

Lamela first made his name in Europe at AS Roma, but with Mourinho now there, a return to his former club seems out of the question, leaving the door open for other Serie A sides.

One of the recurring names said to be interested in Lamela are Napoli, who will also be changing managers in the coming months. 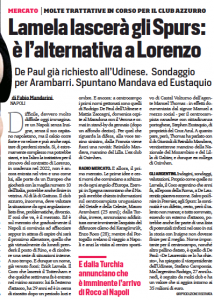 A lot could depend on Lorenzo Insigne’s future, but Corriere dello Sport explain the Italians are ‘starting to appear’ on the market, trying to ‘resolve a series of internal situations’.

Lamela’s name is one that has ‘already emerged’, as the forward ‘will leave Tottenham’ as he entered Napoli’s radar ‘a few weeks ago’.

Said to be ‘looking for redemption’ after a tough time at Spurs of late, the player still has a few good years ahead of him at 29, meaning it’s time to prove a point.