You might have noticed a few stories over the past few months regarding Mike Maignan and a supposed Tottenham interest.

This stems from the idea Hugo Lloris isn’t going to be Spurs’ goalkeeper forever and will eventually need to be replaced.

However, we all know that’s not something that will take place in the immediate future, which is a bit of a problem for Maignan.

L’Equipe look at the situation on Tuesday and state the player will ‘prioritise the sporting aspect’ when choosing his next club, and his ‘eventual exit to Tottenham’ can only be taken seriously if it ‘doesn’t weaken his position as France’s number three’ ahead of next year’s European Championship. 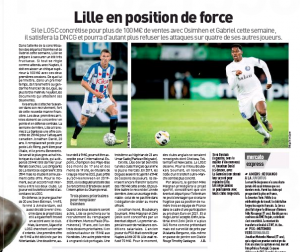 On top of that, Lloris would have to agree to the extra competition, since he is currently the undisputed number one at the London club under José Mourinho.

It’s not a certainty just yet, regardless of how often the Portuguese’s assistant whispers Maignan’s name into his ear, because we all know their current goalkeeper is more than good enough for the time being.