With no real backup for Hugo Lloris this season at Tottenham, Fabio Paratici turned his attention to Italy, where Pierluigi Gollini was brought in on loan.

Whether the Italian was expecting to play a lot isn’t clear, but the 26-year-old has seen his appearances come exclusively in cup competitions, as he has yet to feature in the Premier League.

With a €13m option to buy in the deal struck with Atalanta, there was always the possibility of him staying permanently at Tottenham, potentially sticking around to succeed Lloris in the long-term, but Corriere della Sera’s Roma edition suggest that will not be happening.

That’s because Lazio are now taking an interest in the player, with it said the track leading to the Spurs loanee ‘is gaining consistency’.

It’s made clear that ‘it’s difficult for the London club to exercise the option to buy that allows them to take the goalkeeper outright given that he practically never plays’.

This means Gollini ‘will almost certainly return to Bergamo in June, but he will not stay there’. 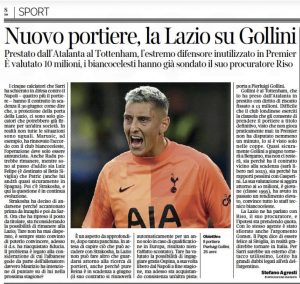 There are two reasons for that, with the first being the fact his contract with Atalanta runs out in 2023, while the second is he simply doesn’t get on with the club’s manager, Gian Piero Gasperini.

Gollini is reportedly valued at around €10m, and has convinced Lazio he would be the ideal man to replace Thomas Strakosha in the long-term.

Corriere della Sera state the Serie A side have already spoken to the player’s agent, Beppe Riso, and ‘the hypothesis is gaining momentum’, meaning a Tottenham exit is now more than likely.