Filip Krovinovic to West Brom has been ‘resolved’ report Record on Friday.

The Portuguese media have been leading the way with claims around the Benfica player and a loan move this summer.

He was first expected to move within Liga NOS to get experience, and then Norwich City showed up. The chance to send him on loan to English football, and therefore increase his value, is one the Lisbon club didn’t want to miss.

Then West Brom joined the chase, and Slaven Bilic personally convinced the player. The Championship doesn’t have the same status as the Premier League, but Benfica agreed due to the likelihood of more game time.

That led to the Portuguese press announcing a few days ago that the loan would be agreed for around €300k, which doubles in case of promotion, and a further payment of €110k if Krovinovic doesn’t play half the Baggies’ games.

And then, something went wrong. Everything stalled and the 23 year old started preseason with Benfica. It wasn’t made clear, but there was the possibility West Brom weren’t thrilled with how public everything was. 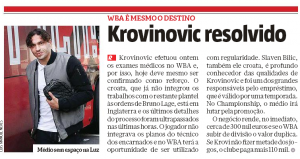 Whilst Benfica may be happy for the playing clause to get out there, it would be no surprise if the English club weren’t.

Now Record say the player had his medical on Thursday and an announcement is imminent. It’s not clear what changed, perhaps there’ll be no mention of the playing clause in the confirmations published by the clubs.

However, these things have a habit of getting out in Portugal, sooner or later.