When you’re being linked to a club, turning up at their stadium to watch them play never dampens the rumours, even if you are simply there to gaze upon the wonders a football game has to offer.

That’s what happened when Sami Khedira made the trip to sit in the stands for Arsenal’s friendly against Lyon amid claims the Gunners were interested in the German’s services.

Tuttosport immediately latched onto it on Monday, although they give very few details, only stating that a free transfer could be expected, as Juventus, like they did for Llorente, would be willing to let him rescind his contract to give him freedom of choice.

Over at Corriere dello Sport, however, there’s a bit more meat on their story, and they explain Khedira would ‘welcome’ the chance of an experience in the Premier League. 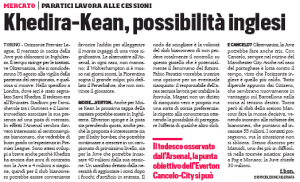 The newspaper further state ‘developments are expected soon’, as Juventus wouldn’t mind seeing his €4m salary off their wage bill.

Wolverhampton are also mentioned as an alternative in Corriere’s story for a Premier League transfer, while Fiorentina in Serie A and Fenerbahce in Turkey could also be possible landing spots for the veteran elsewhere in Europe.