Estoril star Chiquinho is ‘on his way to Wolverhampton Wanderers’ with a move to Molineux now ‘imminent’.

That’s according to A Bola and Record, who say Bruno Lage’s side are set to complete their first move of the January transfer window.

Chiquinho has been one of the stars of the show for Estoril this season, with four goals and six assists In 20 games in all competitions earning the 21-year-old plenty of attention.

Wolves have jumped ahead of the competition, though, with A Bola reporting that his ‘excellent season’ has led them to make their move this month.

They report that a move is now ‘imminent’, and the player is ‘on his way’ to link up with Lage’s squad in the near future.

Interest from the Premier League is nothing new as West Ham and Chelsea have had the player on their agenda for the last two years. He was also the subject of approaches from Almeria and Grasshoppers in the summer. 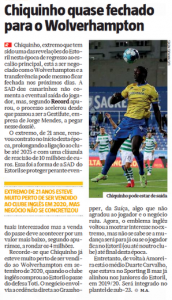 Chiquinho opted to stay where he was and renew his deal with Estoril at the time but has now elected to move to Wolves and will be ‘one of the biggest transactions’ in the club’s history, say A Bola.

Record, meanwhile, say a deal may be closed ‘in the coming days’, and the transfer process has been accelerated after Jorge Mendes’ company Gestifute took over the player.

They say a deal with Wolves is being negotiated, but it is not yet known whether the player will move this month or remain where is until the end of the season. 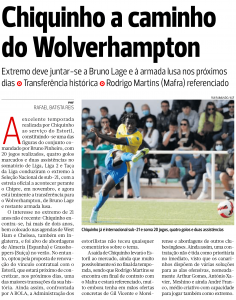 A deal worth around €4m is being worked on, which is something of a bargain given the winger signed a new deal in the summer that includes a €10m release clause.

It’s not the first time Wolves have been keen on the player after coming ‘very close’ to signing him in the summer of 2020. That never happened but they’ve returned for a second time and with Mendes leading the charge, look likely to get their man.