Home Europe Player ‘on his way to’ PL, Newcastle in pole, ‘prepared to get...
SHARE

On Thursday, TuttoMercatoWeb provided an update on the Stefano Sturaro situation, explaining the Juventus midfielder had turned down all of the offers presented to him in order to prioritise a move to Newcastle United.

The Magpies have been interested in the 25-year-old for some time now, but are yet to meet Juventus’ asking price of around €20m.

TuttoMercatoWeb believed €18m would be enough, but Rafa Benitez’s side’s next offer was expected to only be €14m + €2m in bonuses.

However, Gazzetta dello Sport on Friday are a bit more optimistic about the whole thing, claiming Sturaro is on his way to the Premier League, with Newcastle in pole. 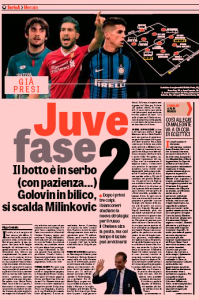 That isn’t new information in itself, but the fact the Italian newspaper then reveal the northern club are ‘prepared to get closer to the €20m or so requested by the Bianconeri’ is a very good sign.

If they do edge towards that figure, then there’s little Juventus will be able to argue about.

Of course, this doesn’t mean it’s done. Far from it.

Just look at how long West Ham and Lazio have been quibbling over a few million for Felipe Anderson.