One of them is A Bola, who don’t really bring a lot of details about the chase. All they do is to report a list of clubs who are interested in the winger, and those would be Fenerbahce, Betis and the Hammers.

Now O Jogo brings a little more information. They report that after Porto’s game against Sporting for the final fixture of the Portuguese league, Brahimi went back to the pitch with family and friends to take a few pictures at the Estádio do Dragão.

Even though the stands were empty by then, it’s claimed that Brahimi waved as if he was saying farewell to the club.

Since the player chose not to renew his contract, O Jogo writes that his departure isn’t official, but ‘inevitable’, and could be confirmed next weekend, after the cup final. 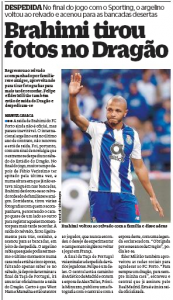 O Jogo only lists West Ham United and Marseille as the interested clubs, and says that Brahimi has never hidden his wish to play in the Premier League or to return to France.

In five seasons for Porto, Brahimi scored 54 goals and made 43 assists in 214 appearances. He won a Portuguese League title in 2018 and a Supercup in 2019.