In need of a new No.9 to lead their attack next season, Barcelona have identified Erling Haaland as their priority target in the summer.

The La Liga side are optimistic of completing the operation, but are aware the deal can be complicated due to the competition they will face in signing the Borussia Dortmund star.

It’s claimed the England international’s name has come up at the Camp Nou in recent weeks because he ‘wants to leave’ Tottenham. He considers his ‘cycle has ended’ at the north London club.

The 27-year-old’s desire to join another team where he can be hopeful of competing for important titles.

According to the report, Spurs would see the striker’s exit as being able to help them earn significant money and they’ve only put one condition, which is that he cannot sign for another Premier League side.

Manchester United and Manchester City are ‘crazy’ to sign the frontman, but his employer will not allow him join either. 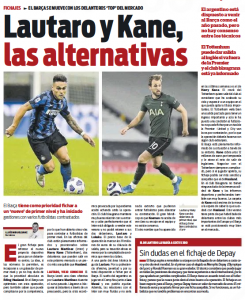 Kane will only be allowed to leave Tottenham for a foreign club.

Barca have him on their ‘agenda’ as an alternative target. He’s willing to leave England and the Catalan club are ‘fully informed of his situation’ through his environment.

Ronald Koeman’s side are aware negotiating with Tottenham won’t be easy, but if the player makes an effort, his signing could be ‘easier and more affordable’ than Haaland.