Over the weekend, Marca editor Jose Felix Diaz reported on the ‘harsh reality’ facing Zinedine Zidane and Paul Pogba and their desire to work with each other.

Marca again state it as fact that the midfielder ‘wants to leave Manchester United’, which isn’t too huge a claim given he said so himself earlier this year. There’s been nothing which would suggest a change in the player’s thinking, yet the circumstances to grant a move haven’t yet arrived.

Pogba would ‘love to wear’ the white shirt of Real Madrid, and Zidane would ‘welcome him with open arms’. The manager is said to have been waiting for Florentino Perez to cave-in and commit to going all out for the signing, yet Marca say that moment isn’t any closer.

Perez didn’t want the signing as much as his manager, having doubts over the cost of a deal and where Pogba would fit within the team. 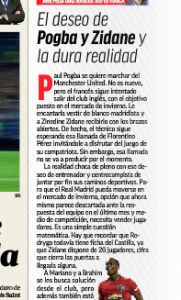 A January approach to Manchester United ‘seems ruled out’ due to Madrid turning their form around, and not showing a huge gap for the United player.

Pogba being out for so long will no doubt add to that.

Even if all of that could be solved, Madrid would need to sell players first, and should that hurdle be jumped, Pogba’s wages would prove another serious issue.

Jose Felix Diaz is making it clear this one is dead, for now at least.