On Tuesday, it was reported that one of Dejan Lovren’s agent was expected in Milan to hold talks with clubs.

Whether he was there to discuss the Liverpool player’s future wasn’t explicitly detailed, but the belief was he could end up sitting down and discussing his client with a couple of Serie A sides.

Milan were the obvious one, as they have been linked a number of times with the Croatia international, but Gazzetta dello Sport reckon AS Roma could now be an option, who see him as an alternative to Toby Alderweireld.

Their pursuit of the Belgian has yet to produce anything, and with the release clause in the Tottenham player’s contract now expired, it could be even more difficult. 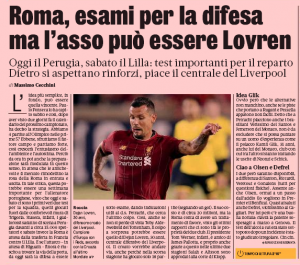 That’s why Lovren could be a fall-back option, as the centre-back is said to ‘want to leave’ Anfield after playing just 18 times last season.

As previously reported, he would cost around €20m, which is cheaper than Alderweireld, and Roma are hoping their good relationship with Liverpool could work in their favour here, banking on the friendship between Tom Werner and James Pallotta.

This would certainly be easier to pull off than dealing with Tottenham, especially if they don’t want to meet the €28m demands for the Belgian. 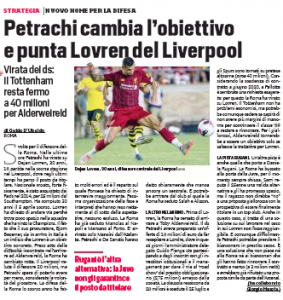 The story is also pushed by Corriere dello Sport, who have it on the front page of their Rome edition.

It’s stated Gianluca Petrachi switched to Lovren after Spurs refused to come down for their now €40m valuation of Alderweireld.

Roma’s hope is that they can get Lovren for less than the €20m because of his desire to leave.