Mundo Deportivo journalist Miguel Rico explained on Thursday why it’s ‘almost impossible’ for Barcelona to sign Manchester United’s Paul Pogba. In the same report, there is also a mention about Frenkie de Jong of Ajax.

On September 26th, the same publication claimed that several other clubs are interested in the 21-year-old, but the Blaugrana have the entire situation under control.

Today’s report suggests Ernesto Valverde’s side talk to the Eredivisie player and his environment every week and Erik ten Hag’s man declares his intention to play for the Spanish champions. As they look to find an agreement with the player, his agent, Ali Dursun is still negotiating with other clubs and his client’s price tag is ‘skyrocketing’.

Manchester City and Real Madrid’s interest is also talked about and the figure quoted for the latter is believed to be €85m, something Barcelona are unwilling to pay for De Jong because, in their eyes, a fair price for him is around €50-€55m.

However, this is far away from what his employer’s are demanding to part ways with the player. The confidence that’s maintained at the Camp Nou is that De Jong’s desire is to follow the footsteps of his compatriots who have played for the club in the past and the Ajax star’s will is to play alongside Lionel Messi.

On Wednesday, Mundo explained a decision on the versatile player’s future will be made in the ‘coming weeks’ and it’s now claimed that Barcelona are already negotiating with Ajax sporting director Marc Overmars.

The report also talks about Manchester United’s interest in him and the Red Devils are in contact with the Dutch club’s executive director and Old Trafford favourite Edwin van der Sar. There is no mention of whether De Jong would be willing to join the Premier League side, but we may have more on this from Mundo tomorrow. 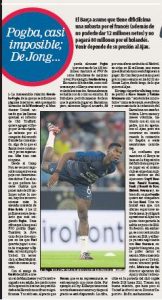 Pogba and De Jong have been targets for Barcelona in 2019 and today’s report from Rico explains why it may be difficult for the club to sign these players. For all you know, this could be a tactic from the European giants to put pressure on the future targets to push for a transfer.

Either way, the saga surrounding the duo does not end here.