When we read about Sporting’s chase for João Mário in Correio da Manhã, we considered thought of writing something about the competition with Wolverhampton Wanderers.

Nuno Espírito Santo’s side have recently been linked to the Portuguese winger, so they could have an interesting battle with the Lions to sign the player from Inter Milan.

But when covering the claims today, journalist Alfredo Pedullà brings another Premier League club to the mix. He writes that Everton are another club we should have an eye on.

There aren’t any big claims in the story, and Everton are pushed forward because the player wants to return to English football. To make it clear, they were never named in Correio da Manhã’s article. 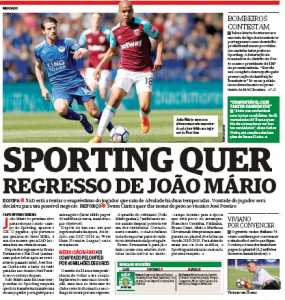 The discreet mention of Everton is low key for now, so it’ll be interesting to see if anything develops from it.

Inter Milan are very keen to sell the player and it’s felt like they’ve been pushing him to Wolves via Jorge Mendes.

Perhaps Everton will be the next club they’ll give a try.