Italian newspaper Tuttosport on Friday had an entire page about possible arrivals and departures from Manchester United.

The first claim is about Paul Pogba, saying the Frenchman has been demanding £600k a week to renew his contract with the Red Devils.

Juventus and Real Madrid are said to be keeping an eye on the situation, although there’s nothing about sudden moves for now.

The other report is about Mario Mandzukic, who’s ‘waiting’ for Manchester United to go and get him in the January transfer window. 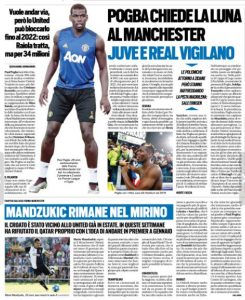 The attacker’s versatility would play on his side, especially because Ole Gunnar Solskjaer still hasn’t defined the team’s front trio so far.

Although Manchester United would also be targeting other players, such as Paulo Dybala, Mandzukic would be a more realistic signing due to his price, which would be between €12m and €15m.

It’s claimed that the Red Devils’ interest is the reason Mandzukic has postponed a move to Qatar, even though his salary at Old Trafford wouldn’t be a6 big.