Home Europe Player a ‘victim’, his ‘misfortune’ will see transfer to Wolves unless something...
SHARE

Sunday’s edition of Marca presented Jonny Otto’s permanent transfer to Wolves as a sure thing.

They do very similar on Monday, but the Spanish newspaper adds the move will happen ‘unless something changes’.

That perhaps creates some doubt, even if just a little.

Marca don’t explain the reasoning for any doubt, but it could be related to the player.

It’s explained that when he signed from Celta Vigo in the summer, Jonny was informed the only reason he wasn’t going straight into Diego Simeone’s squad was Atletico’s wage bill hitting its limit.

They now say that he’s a ‘victim’ of Alvaro Morata’s arrival on loan from Chelsea, because Atletico need to raise some money. 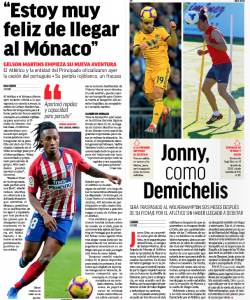 It’s explained the ‘controls imposed by the league’ meant Jonny had to join Wolves on loan in the summer, and his ‘misfortune’ this time will ‘be final’… with Marca making it sound a sure thing again.

The situation is compared to that of Martín Demichelis, who signed for Atletico Madrid in July 2013, didn’t play for them, and moved to Manchester City in the same window.